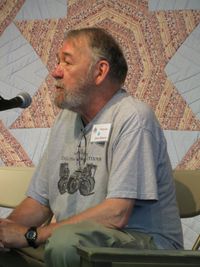 I'm honored to join the incomparable John Roberts where we will present a discussion about sea shanties, their place in history, and current use (including the history behind the viral TikTok collab video, Soon May the Wellerman Come). This session is brought to you with support from the West Virginia Humanities Council and will be broadcast on Facebook Live. For a "front row" Zoom seat, email augustaheritagecenter@dewv.edu. John Roberts - Born and raised in Worcestershire, England, of a Welsh family, John is a national treasure. He is one of the foremost culture bearers of his genre, specializing in songs of the sea, pub songs, and traditional British Isles folk songs. He is also considered one of the foremost Anglo concertina players in the English-speaking world and uses the banjo for unique settings in many of the songs he sings. He can give the background of any song he performs, often telling the listener the circumstances from which it might have been written and from whom the song was collected. John's latest album is a collection of maritime songs entitled "Sea Fever." John is fantastically entertaining which only adds to his wonderful expertise. We're expecting a splendid time for all!