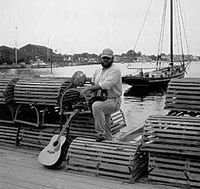 I'm honored to participate in the inaugural Port Jefferson Sea Music Festival. I'll be joined by a wonderful collection of performers singing a variety of traditional and contemporary songs of the sea. The site for the festival is on the grounds of the former Bayles Shipyard, which was one of the active building yards from 1834 until after World War I. There will be wonderful Maritime trade demonstrations as well as the music. The festival will include the marvelous talents of The Johnson Girls, Stout, Tim Radford, David Jones, Alan Short, Ken Sweeney, Heather Wood, Joseph Morneault, and Maria Fairchild and Adam Becherer. Chris will be Performing at the MainStage from 12:30 to 12:55, and at the Schooner Ginny Marie from 2:30 to 2:55. There will also be an "All Hands In" concert at the MainStage from 5PM until 7PM. It should prove to be a wonderful, festival of Sea Music and demonstrations from Long Island's Maritime Heritage!